NEW YORK -- JUNE 2017 – Thousands of years ago, ancient aliens called the Marradians visited Earth to share their knowledge and make humanity what it is today. Well, we gotta blame someone! Now they’re coming back to destroy us. Unless Mad Mel, the Hans Solo of our story, can save the planet.

Performances of the one-act musical will be held Tuesday July 18 at 630PM, Saturday July 22 at 7PM and Sunday July 23 at 3PM at the Workshop Theater’s Main Stage, 312 West 36th Street in Manhattan.

Tickets are available at https://web.ovationtix.com/trs/pr/975143. 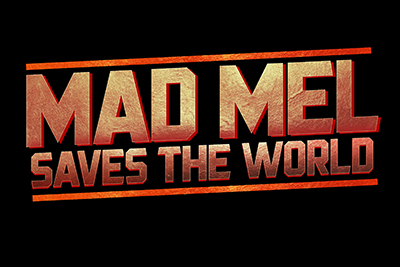 In Mad Mel Saves the World, our hero is a best-selling Earthling and author of 361 books on the Marradians - except that it turns out the Marradians are real, and under the despotic rule of an evil Imperial Chancellor. Now Mad Mel must travel through a Wormhole to join the Marradian Resistance and save Earth from an imminent invasion. Over the course of his journey, Mel falls in love with a bad-ass alien waitress and learns to dance the Hoovian with the natives while wearing an elegant dress that is the male fashion fad of the times, maneuvering his way among the various power factions , including a female contingent determined to end male domination of society – by any means.

Mad Mel Saves the World is written by Gary Morgenstein, with music and lyrics by Erich Rausch, who will also direct the Festival run.  Sara Koch Casting is the casting agency.

The musical marks another expansion in the popular Marradia brand featuring the original stage play, a radio series (Mad Mel and the Marradians), a guide to the Marradian language and a line of books including the upcoming Ancient Aliens: Extraterrestrial Gods, Religions & Mystical Practices.

Gary Morgenstein (Playwright) wrote the critically acclaimed off-Broadway rock musical The Anthem, and his dramatic works range from A Tomato Can’t Grow in the Bronx and Right on Target to Ponzi Man. Morgenstein’s novels include A Mound Over Hell, set in 2098 as baseball begins its final season ever following America’s defeat in World War Three. This first book in The Dark Depths trilogy will be published by BHC Press in March 2018. His other novels include Jesse’s Girl; Loving Rabbi Thalia Kleinman; Take Me Out to the Ballgame and The Man Who Wanted to Play Center Field for the New York Yankees.

Erich Rausch (Director/Composer/Lyricist) was a recipient of the Rising Star Award from Paper Mill Playhouse for music direction of Once on This Island. He has worked on over 500 productions as a composer, arranger, music director, director, stage manager and actor. He most recently music directed Spring Awakening at Johns Hopkins University. Rausch was music director for the New York premieres of Brecht's The Roundheads and the Pointheads, and Ray Bradbury's Fahrenheit 451. Revues include the Everly Brothers’ Dream!Dream!Dream! at the Claridge in Atlantic City, the Carpenters’ Close to You, and a Lorenz Hart show. Rausch has played leading roles in over 50 award-winning shorts on the festival circuit, including Remember Us, Everything’s OK, and Dinner and a Movie, all featured at Cannes in 2016.

Most recently Sara Koch Casting has cast the Off-Broadway production of Daddy Issues at the Theatre at St. Clement’s, NYC and the film Aster and Sidney which has been nominated for Best Sci Fi/Fantasy Film by FirstGlance Film Festival LA and continues to appear in many film festivals including Culture.PL in Poland. Previously, Morado has been seen at The Women’s International Film and Arts Festival with PBS amd Viva Latino International Film Festival – Manhattan. Sara Koch Casting has worked on many other film, television and theatrical productions including The Manufacturer’s Daughter, Illegal Patty Pan, Dirty Hands and The Testimony of Erin J.. Sara Koch Casting also cast Take Wing and Soar, Inc.’s tenth anniversary season including The War of the Roses (Faison Firehouse Theatre, NYC)  and The Importance of Being Earnest (The Poet’s Den, NYC) , Anthony and Cleopatra (The Poet’s Den, NYC) and three time AUDELCO nominated production of Massinissa and the Fall of the House of Thunder (The Poet’s Den, NYC).