Exclusive: Helix's Jim Thorburn on The Mysteries of Caleb

Tonight Syfy airs its second season finale of Helix. Many fans have been wondering about the mysteries surrounding Caleb, played by Jim Thorburn. Caleb was first seen in the beginning of the season when he ran into Julia (Kyra Zagorsky) on the island, thirty years in the future. Tonight many of the questions about Caleb will be answered.

Thorburn recently talked to Jamie Ruby of SciFi Vision in an exclusive interview about his time working on the series and the mysteries surrounding his character.

Thorburn worked behind the scenes on a set before he started his acting career. "I got into acting after working in the art/set decoration department on The X-Files pilot. It was shot in Vancouver. Having the opportunity to work on set behind the camera, I became intrigued by the performances I was seeing firsthand. It was like a private acting class. I soaked up as much as I could. While working on the second season of The X-Files, and thanks to David Nutter and Chris Carter, I was given the opportunity to audition for the Millennium pilot and booked my first acting role. Through that experience, the biggest thing I learned was how important tone is to any project, and this has always influenced my acting."

Caleb was not the role that the actor first auditioned for on Helix. "Initially I taped an audition for the role of Brother Michael and got called back. The part went to, as we know, the very talented Steven Webber, who did an incredible job.

"But as luck would have it, the role of Caleb came up and they requested a taping for that part. I ended up booking it."

Thorburn knew right away he wanted to be a part of the series. "When I first read for Helix, I bought the season one DVD package and binge-watched the entire season. It was an incredible sci-fi take on a psychological thriller, and I knew I wanted to be a part of the show. Caleb’s character was interesting to me because he has so many loaded secrets and isn’t sure what to do. He is stuck in an emotional and mental prison."

The actor took inspiration for Caleb from another series as well as his costume on Helix. "I felt some influence from the show The Walking Dead as they are survivors, like Caleb is.

"Also, when I was at my first wardrobe fitting, Marianne Carter, the costume designer, showed me some pictures, which were her inspiration for the role. They were lumberjacks from France and something about that helped me connect even more." 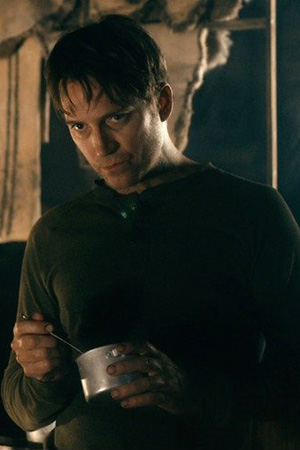 Caleb has been surrounded in mystery from the time fans first saw him on screen. There have been many theories, and the question on everyone's mind is 'who is Caleb?' "That is the big question. I’d love to give more insight but all will be revealed [tonight]. And yes, a lot of people have been asking. The response to Caleb has been really exciting for me as the fans have been amazing. I really appreciate all their support."

The actor didn't have all the answers when he first started working on the series. "After I booked the job, I was only given the first two scripts - episodes one and two. At that point, I didn’t know a lot. I was fortunate to talk to one of the writers, Tim Lea, who provided a backstory on Caleb, which helped a lot. After that, the information came to me as the scripts did. It was exciting to get them and find out what direction I was headed."

There were a couple twists that surprised Thorburn the most. "After episode five, I was leaving set and was told that I would be taking the katana to Brother Michael’s head. I didn’t see that one coming. It blew me away.

"And of course, I was very excited to find out what happens in the finale."

The actor very much enjoyed filming that scene with Brother Michael. "I was highly excited to be part of such a pivotal scene. It was shot on a 30-foot high riser with a multitude of angles to get the reveal perfectly. I loved how in pure Helix-form, his death came out of nowhere. Sneaking up on Brother Michael and becoming the hero was pretty amazing."

Thorburn spent the majority of his time working with Kyra Zagorsky. "It was great to work with Kyra, she was very supportive and has a vast knowledge about the show. Often I would bounce ideas off her because she really knows Helix." 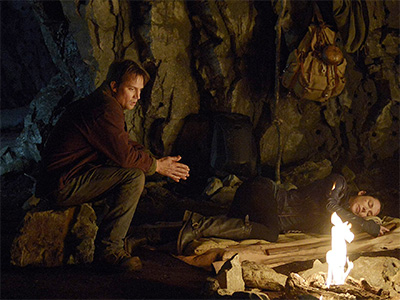 His favorite scene is one of his first with the actress. "In the episode “San Jose,” taking off the mask after interrogating Dr. Walker, that reveal is my favorite."

Caleb being alone in the future was a bit challenging for the actor. "Trying to keep Caleb optimistic was very challenging. Here’s a guy living 30 years in the future as a total reclusive sitting on a powder keg of secret knowing one day “they will come." "

Thorburn really enjoyed the experience of working on Helix. "I had one of the greatest times playing Caleb. The Helix cast and crew were incredible and very welcoming. And the fans! The response from the sci-fi community has been overwhelming and I feel very grateful for their support."

The season of Helix may be ending tonight, but you can still catch Thorburn again on television. "I will be guest starring in episode 10, “Purgatory,” of the third season of CTV’s police procedural drama Motive. I am playing the character of Charles Castella. He is an attorney who is involved in a murder.

"I will also be seen in Muse Entertainment’s mini-series The Fixer. I play Riley Stokes who is the boss at the National Transport Safety Board."

To find out Caleb's secrets, be sure to tune into Helix tonight at 10/9c on Syfy.
Twitter
BotonSocial por: SocialEmpresa
Category: Interviews